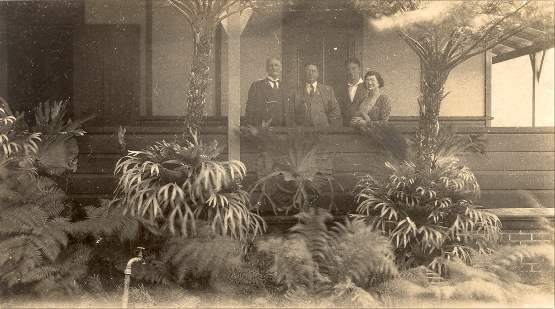 The Gosford Horticulture Research Station was established by the State Government as Narara Viticulture Nursery in 1912 as a consequence of failures to produce Phylloxera-resistant rootstocks to combat a major outbreak of the Phylloxera aphid in the grape growing areas in NSW and Victoria.

Of the two residences built on the 220 acres, the Heritage House was built 1915-1916 as the Manager’s Cottage for Superintendent, David Jenkins, who stayed in the role until 1919.  The cottage was built out of weatherboard and fibro-cement externally, had a brick chimney, and traditional wide verandahs and balustrades.

Attached to the north side of the cottage was accommodation for 10 boys from Gosford Farm Home, a reformatory school.

The current chicken run and hen house at the rear of Manager’s cottage has holes in the concrete floor and floor drain, indicative that in its original form this building was probably the shower block for the former dormitory wing of the house.

Harry George White was Superintendent for 20 years, from 1919-1939, with wife Lydia and four children.  During his tenure, he was instrumental in developing the phylloxera resistant wine stock for grapes.

Notwithstanding the problems with floods and droughts, occasional hailstorms and frequent fungal infestations, the Narara Viticultural Nursery was to produce vast quantities of disease-resistant grafts over more than forty years, making a major contribution to the success of the wine and table grape industries in NSW.

In July this year Nicky and Mark took possession of this historic building and are committed to major improvements to restore the house to its previous glory.

In celebration, Mark commented: “This week this 103 year old beauty finally became ours at Narara Ecovillage. Like any relationship, it will take a LOT of love and care to maintain, but it’s a dream to live a little more quietly, closer to the bush in a friendly community. We are so lucky to become custodians of this little piece of Central Coast history.

“It will be a slow transition over the next 2-3 years as we work to make her more energy-efficient, livable and returned to her former beauty. So, I’m in Sydney for a while yet…

“It’s an inspiring project with fellow oddballs, idealists and interesting people who act on their passions and beliefs. Who knows where it will all end up, but I’m pretty sure the ride will be memorable.

“I’m terrified and excited in equal measure as I’m not a handyman (and there is a LOT to do and learn here!) but the ecovillage growing around it should more than make up for any nerves or doubts”.

Less is known about the second house on the site, known as the Foreman’s Cottage.  Completely rebuilt in 2003-4 because of an infestation of white ants, it has been the home of the Hester family since 2013 when purchased by the ecovillage project.

Tony (Village Co-Manager) and Toni, with children Sofia and James, will be purchasing the cottage in Stage 2. They plan to retrofit the building to a much higher standard of comfort.  Tony says the best thing about the house currently is the view!  As you can see in the picture, the verandah is an ideal spot for looking down at the comings and goings of the ecovillage.